In the early 1970s, a small group of individuals were brought together by their mutual love of old farm machinery.  As they worked to restore and maintain various pieces of equipment, they were gripped by the strong conviction that unless something was done to preserve these implements, theses machines would soon pass out of existence.  The idea of an official organization dedicated to the preservation of America’s agricultural heritage began to crystallise.

In 1975, the fledgling group held an agricultural exposition over Labor Day weekend.   Not only did they want to display their equipment, they hoped to create community interest and hopefully acquire new members.

In 1976, the U.P. Steam and Gas Engine Association was officially incorporated as a non-profit group dedicated to the preservation, restoration and exhibition of early steam engines, gasoline engines, tractors, farm machinery, and other items of historical interest.

> Click here to view photos of our early shows

From the very beginning, the Association envisioned building an Agricultural Museum, a permanent facility that would house an eclectic cross-section of farming equipment.  In 1986 that vision became a reality.

> Click here to view photos of the Agricultural Museum through the years. 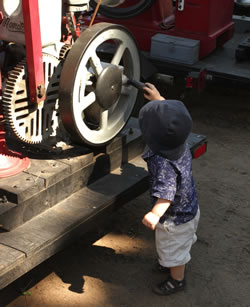 To further the goal of preserving America’s heritage and presenting it to current generations, the Association, with the support of the U.P. State Fair Authority, developed Antique Village.  What started as a single building has grown into almost two acres of exhibits and shops.

> Click here to view photos of Antique Village through the years.

The Association’s annual show is one of the most popular and enduring yearly events in the Upper Peninsula.

> Click here to view photos of our 37th Annual Show

As we approach our 40th anniversary, the U.P. Steam and Gas Engine Association remains committed to our basic mandate: preserving our past heritage for current and future generations.